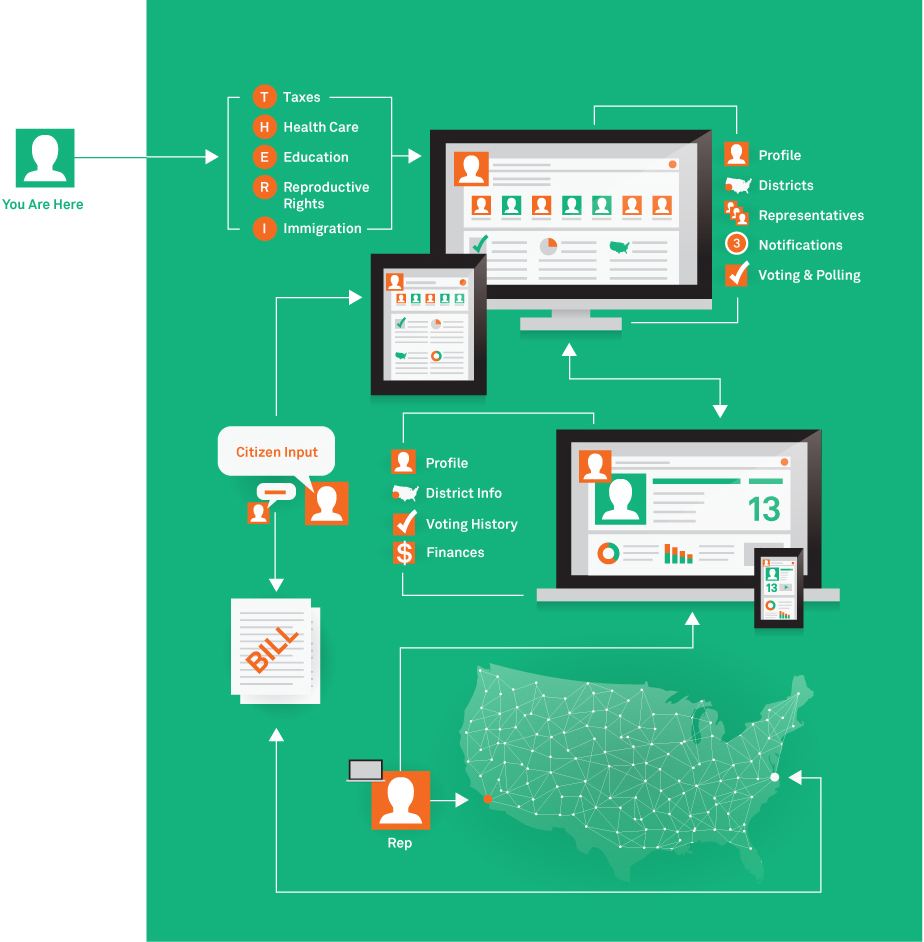 American democracy requires a lot of guesswork. We elect leaders who most closely align with our beliefs, cross our fingers, and hope they represent our interests when they’re far away in Washington. Most of the time, we’re not really sure what they’re voting on and when. If we do find out they’re about to pass a bill on our behalf, we maybe write or call or tweet at them to express our views. But is anyone convinced that they’re really hearing us.

The user interface of democracy is in dire need of a redesign. Here are five steps toward our fantasy system.

1. Party down
What if voters could get all the information they need in one place—a democracy dashboard? First, they’d have to select what they care about. Loyalty to specific issues, not partisan bullshit, is what matters to the voter of tomorrow. An issue-based approach would help them figure out what’s going on across the aisle, and stay informed about the policy problems on their mind.

2. Sign in to democracy
On their computers or smartphones, citizens would sign in with their voter ID and create a profile page (public or private). This platform would pull in information about legislation affecting the issues they follow at the local, state, and national levels. When the time comes, they’d receive a push notification reminding them to vote, and would do so with the click of the button. If voting were as easy as texting, maybe voter turnouts wouldn’t suck so bad. Bonus: A new voter’s first login would come with a tutorial on how the political process and the dashboard work—a real-time civics lesson.

3. Check your rep
Voters need to know who’s speaking for them, so each elected official would have a page, too. This would chronicle a representative’s district, party affiliation, policy positions, sponsored legislation, and votes in a standardized format. It’d show voters who their reps are working for by documenting campaign finance in an interactive chart—a Mint.com for other people’s money.

4. Keep it local
If video conferencing and telecommuting sustain freelancers and long-distance relationships, they can do the same for the U.S. Congress. Our representatives would be more accountable if they spent more time in their home districts. The technology already exists. Marking up a bill? Collaborate using Track Changes. Legislative debate? Try Google Hangout. Voting on a law? Sign in and check a box. The best part about digitizing the process would be a public, searchable legislative history that users could witness unfolding in real time. The “Washington insider” political type would go the way of the dodo.

5. Follow that bill
An easily accessible public timeline of the legislative process would allow citizens to track pending legislation and instantly transmit their views to elected officials. Voters interested in specific legislation could sign up to get notifications as the bill changes and the vote approaches. We spend half our time on Twitter and Facebook, anyway—we should harass Congress while we’re there.