A new noisepop movement is taking back the Tijuana streets from drug cartels.

Blanca Méndez believes in the revolutionary power of partying.
Bijan Berahimi is a graphic designer from L.A. who <3s the color yellow 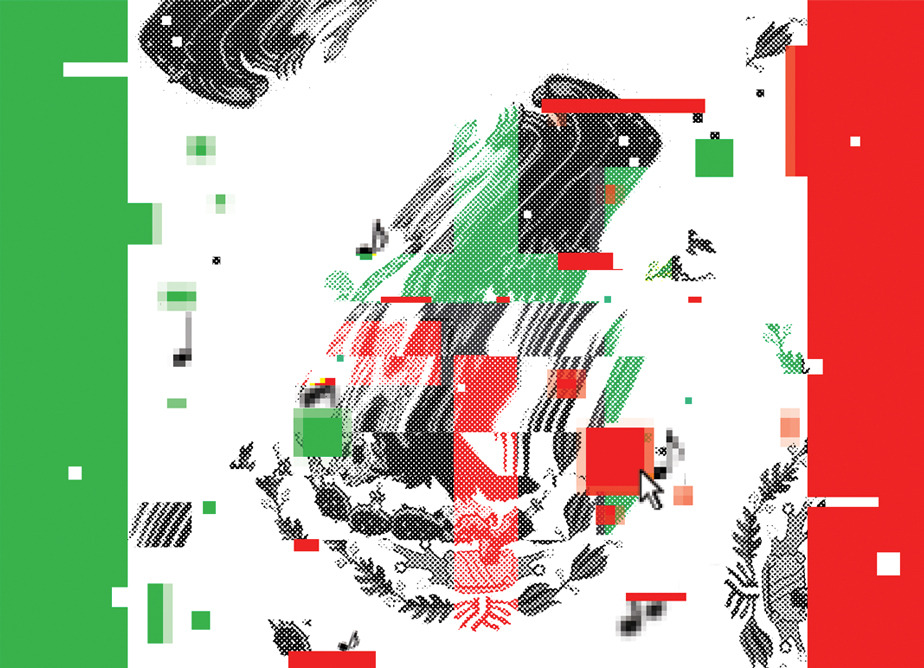 It was not a typical night at West Fargo. The dingy Tijuana bar had attracted an unusually stylish crowd; 20-year-olds in creepers outnumbered the 40-year-old mainstays in cowboy boots. On stage, Los Macuanos maneuvered synths and laptops while macabre images flickered on a screen. Their eerie-festive music and a dark set by solo artist Santos won over the seasoned regulars. The dance floor vibrated with Tijuana’s new noise: ruidosón.“[The older crowd] didn’t know what was going on because of the music and all of these cool kids doing their thing,” 22-year-old Melissa Rico later writes in a gchat conversation. “But they were also dancing and enjoying the vibes ... so it was, like, super cool.

Rico has been attending ruidosón parties since last year, when they had already transformed Tijuana’s party district. Before  ruidosón, she went barhopping on La Sexta, or Sixth Street, in Europop and techno clubs or cheesy watering holes catering to tourists—“regular shit. Boring stuff.” Nowadays, Tijuana after dark looks and sounds like its residents.

Los Macuanos, Santos, and solo artist María y José are the three main players in Tijuana’s ruidosón movement. “Ruido,” the Spanish word for “noise,” refers to the influences of Los Angeles’ noise music scene, the soundscapes of Tijuana, and digital noise. “Són” is a nod to ruidosón’s roots in traditional regional Mexican music.

The scene at West Fargo is a far cry from four years ago, when a surge in drug-related violence nearly shut down Tijuana’s party scene. In 2008, there were 844 killings in the city, the vast majority of which were linked to drug cartels. The murder rate was more than twice that of 2007 thanks to a feud within the Arellano Félix cartel. Every day, locals saw gruesome pictures of the killings on blogs like Narcotijuana. Once a lively stretch of bars and clubs attracting partiers from both sides of the border, La Sexta faded into a ghost town, the threat of violence keeping tourists away and locals at home.

Much of the city’s youth retreated to their bedrooms and the internet. They created a new nightlife online, staying up late on social media. Antonio Gallardo of María y José first started meeting with Horta and Reuben Torres, of Los Macuanos on MSN Messenger and Facebook. They exchanged music and made their own tunes with Sound Recorder software. On the now defunct blog Yo Te Amo, operated by Gallardo, they cultivated a public and participatory community.

Ruidosón is “100 percent internet,” Gallardo says—born of the medium, inspired by its chaos. The proverbial “noise” of the internet can be deafening, and ruidosoneros filter and curate that noise, both literal and figurative. Background noise, like the sound of a radio scanning through the static, becomes a break in the Los Macuanos song “Ritmo de Amor.”

In the face of violence, these kids passed the time at home, but some of them were growing antsy and paranoid. “We didn’t know who to trust, so we didn’t trust anyone,” says Gallardo. In his song “Violentao,” written in 2010 at the height of the violence in Tijuana, he sings “mata a tu padre, seguro es espía,” which translates to, “kill your father, he must be a spy.” This sense of distrust, even of those closest to you, was pervasive.

Gallardo and Horta decided they’d been afraid long enough, that it was time to take back Tijuana’s nightlife on their own terms. So they started their No Rave party series, a nod to the No Wave scene in 1970s New York. At first they threw house parties, inviting their friends and performing with limited equipment. But the parties soon outgrew the venues and moved to places like Bodega Aragón and La Chupitería, two of the first Tijuana bars to resume catering to locals.  Meanwhile, the group’s running jokes and absurdist humor on Twitter feeds and Facebook walls became performances of their own.

The ruidosón parties created a safe space for young Mexicans in an era of political uncertainty. The recent presidential election shifted the balance of power from the National Action Party, or PAN, to the Institutional Revolutionary Party, or PRI. President-elect Enrique Peña Nieto’s candidacy provoked the rise of #YoSoy132, a youth movement that rails against vote-buying and the return of the PRI. One of the major concerns of #YoSoy132 is that Nieto won’t deal with the country’s drug violence problem any better than his predecessor.

While not officially tied to #YoSoy132, Los Macuanos and the ruidosoneros are also reacting to Mexico’s failed drug policies. Even as ruidosón’s musical style evolves, from the early hyper-cumbia to trip-hop boleros to haunting ambient pieces to champeta and narco-tribal anthems, it always comes back to Tijuana’s drug violence. The second María y José album, Rey de Reyes, released next month, is told from the perspective of a drug lord. The album comments on the power wielded by the cartels, how they’re envied and even idolized. Los Macuanos’ latest track addresses this anxiety, too. The title is a set of symbols that translate to “Sangre, Bandera, Cruz,” or “Blood, Flag, Cross,” referring to outgoing president Felipe Calderón’s “real legacy”: 70,000 deaths linked to drug violence.

When ruidosón began, it was a statement that the people of Tijuana refused to live in fear, and now that Gallardo has processed his thoughts through his music and parties, he’s not scared. “I don’t care if I die, or if something bad happens to me,” he says. “I think that part of me grew and I became OK with death.”