Ken Walczak has a mini-fridge for his vermouth collection.
Grace Danico is a Brooklyn-based illustrator who loves fried chicken. 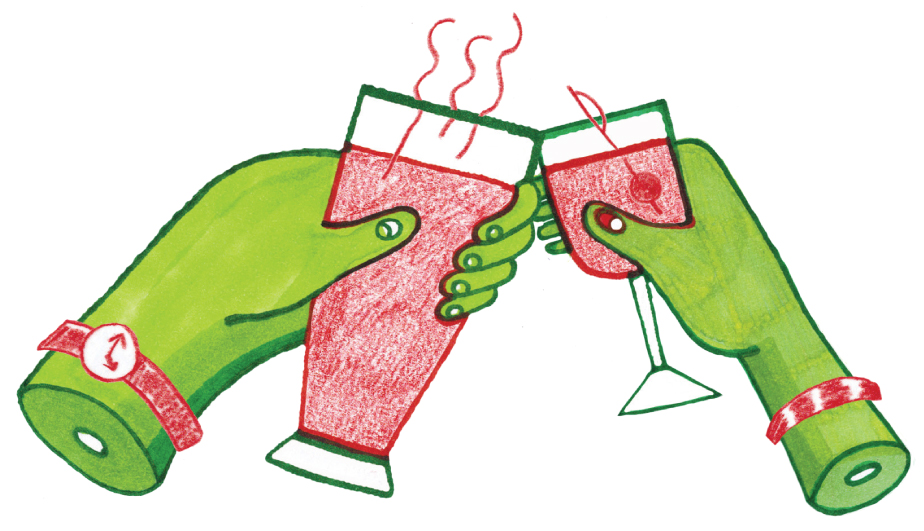 Many languages link drinking with vitality: Whiskey (uisge beatha in Gaelic), eau de vie, and aquavit all translate to “water of life.” English is more ambivalent, though. We call our most potent potables “spirits,” as though they were either brimming with pep-rally fervor or haunting our belfries from the shadows of the afterlife.

For some spirits, the macabre connotation is especially apt. Take crème de cacao. This noble liqueur was once crafted with pride by dozens of artisan distillers. The best of their output became a key component of classic cocktails like the Grasshopper and the Florida Daiquiri.

But the more folks thirsted for Grasshoppers (the chocolate martinis of their day), the more incentive they gave industrial producers to crank out cheap crèmes de cacao based on neutral alcohol with added oils and flavorings. Corner-cutting bars increasingly stocked these substitutes, driving the higher-quality crèmes out of the market. By the late 20th century, the Grasshopper had become a sickly sweet chemical aberration, a historical footnote for cocktail connoisseurs. The few cacao brands that remained on shelves were ghoulish remnants, capable of devouring your liver but only superficially resembling the vibrant liqueurs of the past.

John Troia is no fan of zombies. As the cofounder of Tempus Fugit Spirits in Petaluma, Calif., he’s made it his mission to improve tomorrow’s cocktails by connecting today’s bartenders to yesterday’s ingredients. With extensive research, Troia says he can identify a spirit’s “Golden Age”—usually sometime between the mid-1800s and early 1900s, when the ingredient enjoyed its highest level of innovation. Then he executes the best Golden Age recipe he can find with high-quality ingredients to make a revitalized product that both “tastes and is made to the same protocols” as in its glory days.

For crème de cacao, this meant unearthing ancient bottles from the collectors’ market, tasting their contents, performing gas chromatography to verify the composition of decades-old hooch, and contracting with a distillery equipped to facilitate Fugit’s boozy necromancy. Troia and his partners settled on a 19th-century formula calling for pure Venezuelan cocoa beans and Mexican vanilla (never Tahitian).

The results are magical. Tempus Fugit crème de cacao will make you forget every “chocolate” cocktail you’ve ever had. It smells of baking chocolate and tastes of pure cocoa powder, followed quickly by cinnamon, a hint of cardamom, and that beautiful vanilla. It’s everything you ever loved in a mug of hot cocoa, presented as a sweet, viscous, low-proof liqueur. And it’s delicious enough to rehabilitate disfigured cocktails like the Grasshopper. “When you work with those ingredients the way they used to be, you really start to recognize how balanced and how delicious [the classic] cocktails are,” Troia says.

Call it a victory for the cocktail renaissance, the march of bartenders and barflies over the past decade away from prefab sour mix and DayGlo “-tinis,” and toward the clean lines of Manhattans and Old Fashioneds. “The initial enthusiasm for quality cocktails was all based on getting away from mixers and getting to fresh fruits and quality ingredients,” says San Francisco bartender and cocktail blogger Erik Ellestad. (Think of the corner bar that cropped up near you in the early aughts, with a bowl full of grapefruits to squeeze for Greyhounds.) “The second phase—and one that stands a better chance of succeeding [long-term] because it doesn’t rely [as much] on fresh fruit—is rediscovering the classics.”

That makes access to extinct and endangered spirits more important than ever, as Ellestad learned firsthand in 2009 while blogging his efforts to make every cocktail in the Savoy Cocktail Book, a classic British guide from 1930.

Ellestad made it all the way from Abbey (a gin cocktail) to Zed (more on Zed in a moment), earning bartending gigs at San Francisco’s elite establishments and the attention of cocktail quaffers everywhere. By necessity, he performed some necromancy of his own, resurrecting a long-dead spirit called Hercules, a key ingredient in Savoy drinks like the Ramon Newton, the Wow, and the Zed (half Hercules, half Calvados). Conventional wisdom held that Hercules was an absinthe substitute like Pernod, but a search through Google Books convinced Ellestad it was actually a fortified wine with the caffeinated zing of yerba maté. The maté-infused Hercules completely transformed the Zed. Ellestad blogged his joy in characteristically understated fashion. “While there is no way I can judge whether I am getting closer to what Hercules might have tasted like, this is actually a fairly enjoyable beverage.”

Other times, restoring a classic cocktail means convincing someone to import the key ingredient. That’s the business of Minnesota-based Haus Alpenz, who ended a decade-long crème de violette drought in 2007 by importing Rothman & Winter violette from Austria. Suddenly the bibulous American could enjoy an epiphany-inducing Aviation: gin, lemon juice, maraschino liqueur (an Italian or Eastern European fruit brandy), and violette, shaken and served up. The result is balanced, floral, and blue-gray as a midmorning sky—a far cry from the tart, bastardized version cocktailians had settled for. Ellestad credits Alpenz for their foresight: “They were the first people to really see any minor commercial viability there for reviving these things.”

In the ensuing five years, Alpenz has reinforced the nation’s better back bars with the recently undead likes of falernum (a rum, clove, and lime liqueur essential to the corn ‘n’ oil and several tiki drinks) and Swedish punsch (a spice-heavy liqueur made from sugarcane arrack). Tempus Fugit has ventured even further, successfully resuscitating products like Gran Classico (a “bitter of Turin” and a sort of proto-Campari) and Kina l’Avion d’Or, a quinine-infused apéritif wine, useful as a substitute for the defunct “Kina Lillet.”

Breathing new life into a host of recipes created more than a century ago is a thrilling prospect for a new generation of cocktail classicists. “When these original cocktails were being created, they were all based upon what [their component spirits] tasted like back in the day,” Troia says. If you use the poor excuse for crème de cacao that proliferated before Troia’s hit shelves, “your flavors are all off.”

Start with a new-style gin like St. George’s Terroir, and you’ve got a 20th-century recipe that blends 19th-century liqueurs into a 21st-century base—a potent little reminder that eternal slumber is overrated.

Pour all ingredients into an ice-filled shaker. Shake. Double-strain into a chilled cocktail glass. Garnish with a lime squeeze.

Shake with ice and strain into a chilled cocktail glass.

Combine everything but the brandy in a pot. Heat to 160 degrees. Filter through chinois and add brandy. Let stand for at least a day and then enjoy chilled or use wherever “Hercules” is called for.